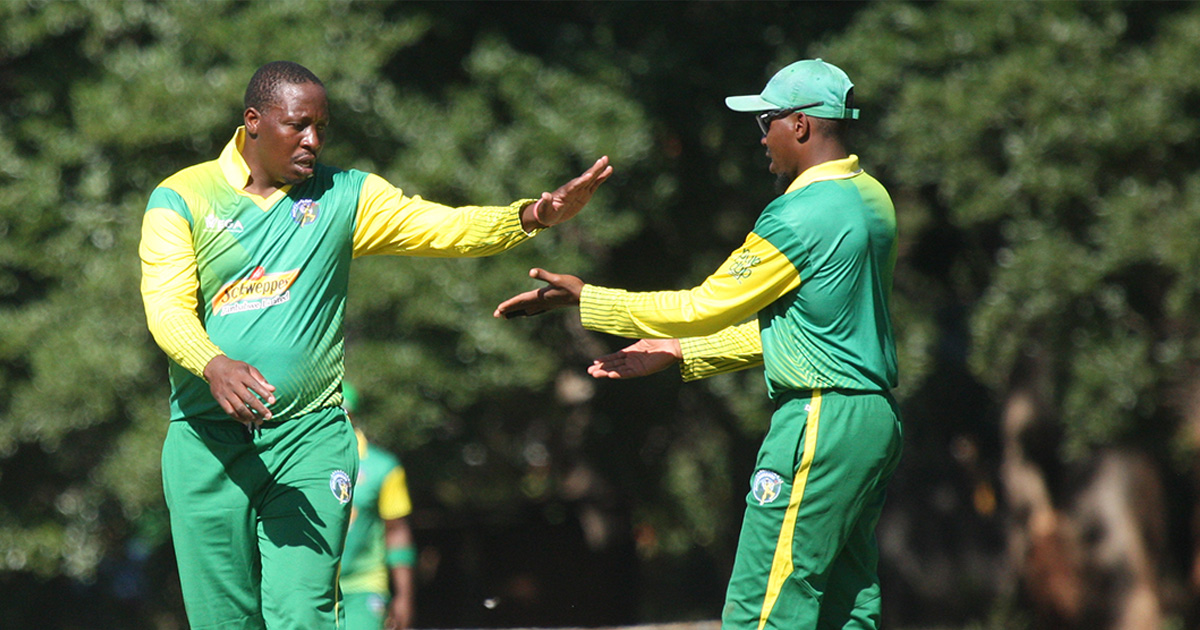 Shingi Masakadza fought a lone battle for Mountaineers in a Pro50 Championship match at Takashinga Sports Club today, but in an exciting finish it was not quite enough, as Southern Rocks finally clinched victory by just five runs.

Mountaineers put Rocks in to bat on winning the toss, and the move paid off well. Rocks lost Tafadzwa Tsiga for one, caught at the wicket off Victor Nyauchi in the second over of the innings, and then Tendai Chatara had the fearsome Cephas Zhuwao caught for five in his next over – both opening batsmen gone for two.

Richmond Mutumbami batted well to score 16, but was then caught off Akshay Patel, followed quickly by Brian Mudzinganyama, who struggled to score just two runs today.

Roy Kaia was lbw to Patel without scoring, and when Patel had William Mashinge caught at the wicket for two, Rocks were facing disaster with a score of 37 for six wickets in the ninth over.

The disaster was resisted by Larvet Masunda and Tendai Chisoro, who stayed together with great determination to put on 54 for the seventh wicket before Masakadza had Chisoro caught for 32, scored aggressively off 24 balls.

Masunda stayed almost to the end of the innings for his fighting innings of 36, but Nyauchi returned to have him caught at the wicket, Joylord Gumbie’s third catch, and ninth out at 124.

The last pair of Travor Mutsamba (a valuable supporting innings of eight not out off 38 balls) and Nkosilathi Nungu (14) took the total to 142 before the innings closed after only 31.5 overs, a very disappointing score for Rocks.

Nyauchi took three wickets for 29 and Patel three for 25, while Chatara took two. Mountaineers had a comparatively easy target to face, but they are not a confident side at present and did not make a good job of it.

Baxon Gopito was soon out for three, but Kevin Kasuza and Dion Myers settled in together and took the score to 54, at which score Kasuza was caught at the wicket off Kaia’s bowling for 24.

This was the start of a slide, as Myers quickly followed, also caught by the wicketkeeper Tsiga off Patrick Mambo for 23. Mambo also removed Gumbie for two, and Mountaineers suddenly found themselves in trouble at 58 for four.

The middle order then simply fell apart, with the solitary exception of Masakadza. Five batsmen around him scored just 10 runs between them, with Chisoro taking three wickets in quick succession, and the score was 113 for eight when he was joined at the crease by Chatara.

They put on 23 vital runs together before Chatara was out lbw to Travor Mutsamba for 15; 136 for nine and seven more runs needed. The last man, Brighton Chipungu, kept his end up for a few balls, but then, on 137, Masakadza’s fine fighting innings of 53 came to an end as he was caught by Chisoro off Nkosilathi Nungu, and the match was over, Rocks scraping home by five runs.

Masakadza had fought a fine battle, but received too little support – he faced 66 balls and hit two sixes and three fours.

In a slow but exciting finish to the Pro50 Championship match at Old Hararians Sports Club today, John Nyumbu saw Tuskers to victory over Rhinos off the final possible delivery by just two wickets.

Tuskers had nearly lost their way at the end after they needed to score only 11 runs off the last five overs, but left it to the last over when they still needed five. Tuskers put Rhinos in to bat and soon took the wicket of Tafadzwa Kaitano, bowled by Charlton Tshuma for six with the score at 11.

Prince Masvaure was batting well, and he found a useful partner in Bright Matsiwe, and they took the score to 64 together before Matsiwe was caught off John Nyumbu for 21.

Charles Kunje proved another good partner for Masvaure, scoring 26 in a partnership of 47 before he was caught at the wicket off Ainsley Ndlovu; 111 for three. Ndlovu followed this wicket by taking a return catch from Masvaure, who had scored 44 off 64 balls, with six fours.

Ernest Masuku removed Remembrance Nyathi for 11 and Johnathan Campbell for 12, and with Nyasha Mayavo out for one the score deteriorated from 136 for four to 138 for seven, and Rhinos suddenly found themselves struggling.

Neville Madziva made eight, but Carl Mumba was again in determined form with the bat, and at just the right time found help from Brandon Mavuta, who scored a brisk 21 off 24 balls before being caught off Tshuma for 21.

Chris Mpofu came in last, and Mumba approached his fifty as the overs began to run out. Sadly, just after Mumba hit Tshuma for a six, the last man, Chris Mpofu, was run out for two and the innings closed after 49 overs for 219.

Mumba finished as the top scorer of the innings with 47 not out off 50 balls, with a six and three fours. Ndlovu returned the best bowling figures with three wickets for 35, while there were two wickets each for Tshuma and Masuku.

Tuskers could scarcely have wished for a better start than the 93-run opening partnership between Brian Chari and Bright Phiri. They moved the score along at almost a run a ball until, in the 18th over, Rhinos finally broke through when Brandon Mavuta had Phiri stumped for 37.

Nkosana Mpofu was quickly caught off Campbell for one, but Chari sailed past his fifty and took the score to 130 before he was caught by Madziva off the bowling of Kunje for 61 – he faced 70 balls and hit some mighty blows with three sixes and five fours.

Milton Shumba played a good innings of 41 off 49 balls, but when he was fourth out at 158, the inexperienced middle order had to rise to the occasion. Clive Madande (14) and Alvin Chiradza (9) played small but valuable parts, while Ndlovu hit out and scored 29 off 24 balls, including a six and five fours.

When he was eighth out at 209, lbw to Masvaure immediately after hitting him for six, the match was at a critical stage, with 11 more runs needed with two tail-end wickets left in five overs.

Tuskers’ main hope now was in the experienced Nyumbu, and that was certainly Tshuma’s feeling, as he blocked ball after ball whenever Nyumbu managed to score a single at the start of a new over.

Six runs were needed off the last two overs, and with Masvaure bowling Nyumbu again scored a single off the first ball, while Tshuma saw out the over without scoring – he had now faced 21 balls without scoring a run.

This now put Tuskers under the pressure of having to score five runs off the final over, bowled by Mumba, to win the match – and still two wickets in hand. Nyumbu scored a single off the second ball, forcing Tshuma to face the bowling, but he managed his first run off the next ball, and then Nyumbu scored another single.

Two runs were needed off the final two balls. Tshuma scored another single, leaving the scores level with one ball left. But Nyumbu was equal to the occasion, and scored the winning single off the last possible delivery, to give Tuskers the victory by two wickets.

Nyumbu scored 11 not out off 11 balls, while Tshuma, whose ultra-defence had been valuable in a way but almost cost his team the match, had scored two runs off 23 balls.

Masvaure was the most successful bowler, with three wickets for 30 runs, while Campbell took two wickets, but 57 runs off 10 overs made his an expensive return. It was a sad result for Rhinos, as victory would have given them a strong chance to pick up their first ever trophy.

They are still in with a chance, though: Tuskers top the log with 30 points, but they have finished their programme, so a victory in the final round on Monday could see either Rocks or Rhinos joining them in the Pro50 Championship final.